He said that the lab will help train nurses and directors with state of the art technology. Funds will also go to Bridge Hospice.

The event will be June 11 at the Findlay Country Club. Grounds passes are $10.

The Opiate Quick Response team has seen some success since it started. Director Bill Fedirka explained that they help people after they overdose.

Fedirka said that with the Opiate Quick Response Team Hotline has been changing lives.

He added that the hotline can be used by friends or family to help out a loved. It can also be done anonymously and through text.

The Flag City Honor Flight takes off Tuesday to take veterans to Washington D.C. The veterans will depart The Cube at 4:30 a.m. with an escort by Findlay Police, The Hancock County Sheriff’s Office, and the American Legion Riders of Great First District of Ohio. In D.C., they will get to see the WWII, Korean, and Vietnam Memorials. They will also get to see the Changing of the Guard at the Tomb of the Unknown Soldier.

The trip comes at no cost to the veterans. It is made possible by donations from individuals, organizations, and businesses.

A Findlay road will be closing today for the installation of a new water main. The Findlay Engineering department reported that Fishlock Avenue will be closed to through traffic for about 4 weeks. The closure will be from 7 a.m. to 6 p.m. Monday through Friday while the work takes place.

A Findlay woman is safe after police reported her missing Wednesday. The Findlay Police Department says 84-year-old Patricia Musser went missing sometime between 10 a.m. and noon. Her car was also missing. She was located in Detroit, Michigan just before midnight after she stopped to ask for directions after becoming lost.

A crash on I-75 south of Findlay killed at least one person this morning. The incident happened around 1 a.m. and is blocking the northbound lanes of the interstate near the rest area south of Findlay. A semi was reportedly on its side and on fire. The State Patrol says four vehicles were involved in the crash.

The Liberty Township Fire Department was on scene until at least 3 a.m. ODOT says the northbound lanes remain closed in that area. Our Waze traffic map suggests exiting the interstate at State Route 235, taking it north to State Route 12, and then heading east back to 75. ODOT says we could be looking at a lengthy delay with this crash.

We’ll have more details as they become available. 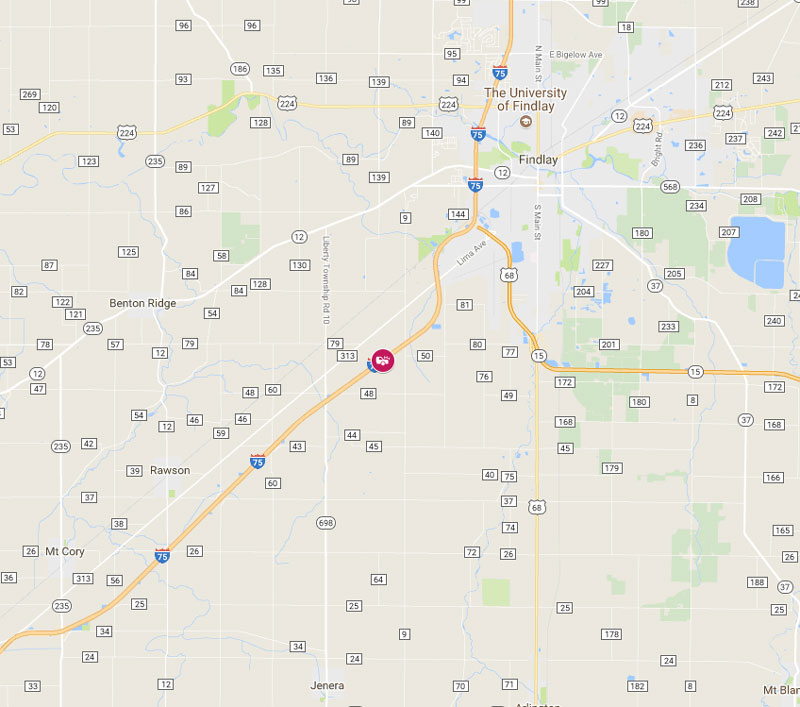 A Findlay man found a hand grenade in his backyard Tuesday. Fortunately, the device found at 1989 Old Mill Road was inactive. The Findlay Police Department contacted the Toledo Bomb Squad just in case. Police are keeping the grenade until the bomb squad can come get it.

John Dosh was doing yard work when he found the device.

Several people in Hancock County lost power for a few hours Wednesday night. American Electric Power says the outages started after storms made their way through the area between 5:30 p.m. and 6 p.m. The company says they were able to restore power residents in the Benton Ridge area by 11:30 p.m.

Bowling Green could soon get some of its power from a community solar field. City officials are proposing the construction of solar panels off East Gypsy Lane Road to help provide electricity to homes and businesses. The project depends on whether Bowling Green can lease the proposed site from Wood County. There’s no word yet on the possible cost of construction.