Hancock Public Health is getting a mobile health clinic to help them administer services to people throughout the county.

“It’s going to be a resource on wheels,” said Health Commissioner Karim Baroudi.

“Instead of waiting for people to come into hospitals or public health, we’re going to go out to them.”

He says it will be used for a variety of prevention initiatives like immunizations and health education.

But he says the first thing it’ll be utilized for is administering the COVID vaccine.

“It fills an immediate need to administer the vaccine, to be mobile enough and agile enough to go to different target groups.”

He says the mobile clinic will be fully equipped with two exam rooms, a lab area and refrigeration and freezing capacity so they can transport medicine and vaccines.

The Hancock County Commissioners recently approved matching the amount the City of Findlay gives to the initiative up to $100,000.

Baroudi says The Findlay Rotary Club and Blanchard Valley Hospital have also been big supporters of the project.

He says the clinic should be up and running and coming to a neighborhood near you in April. 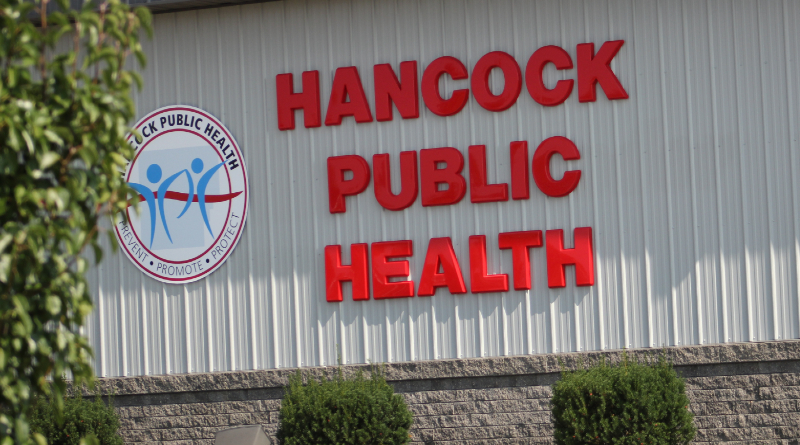 A storm sewer project will impact traffic in and through McComb for approximately three weeks.

The Ohio Department of Transportation says the closure will last approximately 21 days.

Work will take place from the intersection, west to the railroad crossing.

Traffic will be detoured.

All work will be contingent upon the weather.

Get more on the project, including maps of the detours, by clicking here.

Governor DeWine outlined some of the steps Ohio will be taking to begin easing COVID-19 restrictions around the state.

He said if the situation improves in the spring and summer the capacity numbers could be expanded.

The governor said no more than six people can sit together and it’s recommended they are of the same household.

DeWine added that Ohio’s Veterans homes will resume admissions and that restrictions on visits to the state’s behavioral hospitals will be lifted.

The governor stressed that mask-wearing and social distancing will still be required in spaces where other restrictions are being eased.

Sporting and entertainment events will be able to reopen with 25% maximum indoor capacity and 30% maximum outdoor capacity provided they follow established precautions. This is a start. If the situation improves in spring/summer, this could be expanded.

Two people were arrested during a traffic stop on State Route 15 on Thursday morning.

The Hancock County Sheriff’s Office says a deputy pulled over a vehicle for speeding at 7:09 a.m. on State Route 15 near Township Road 240, southeast of Findlay.

During the traffic stop, K9 Charlie was deployed and alerted on the vehicle.

The sheriff’s office says a passenger in the vehicle, Jessica Williams, 30, of Detroit, was found to be in possession of heroin, crack cocaine and methamphetamine as well as a loaded handgun.

She was arrested and transported to the Hancock County Justice Center.

The sheriff’s office says the driver, Anthony Norman, 27, of Detroit, had an active warrant out of Michigan.

He was held on the active warrant. He also did not have a valid driver’s license.

The latest data from the health department shows that one more Hancock County resident has died of COVID-19.

The death toll from the virus in the county now stands at 110.

The number of active cases dropped by one, down to 83 on Wednesday.

Two people are hospitalized with the virus in Hancock County, an increase of one from last week.

Ohio’s COVID-19 vaccination dashboard shows that a little over 1.5 million Ohioans have received at least one dose of the vaccine so far, which is just under 13 percent of the state’s population.

The dashboard shows that around 8,600 Hancock County residents have received at least one dose of the vaccine, which is around 11.5 percent of the population.

People 65 and older are eligible for the vaccine.

Hancock County is still vaccinating the 70 and older age group this week and hopes to get to 65 and up next week.

A vaccination clinic for Hancock County school personnel will be held on Saturday. Read about that by clicking here. 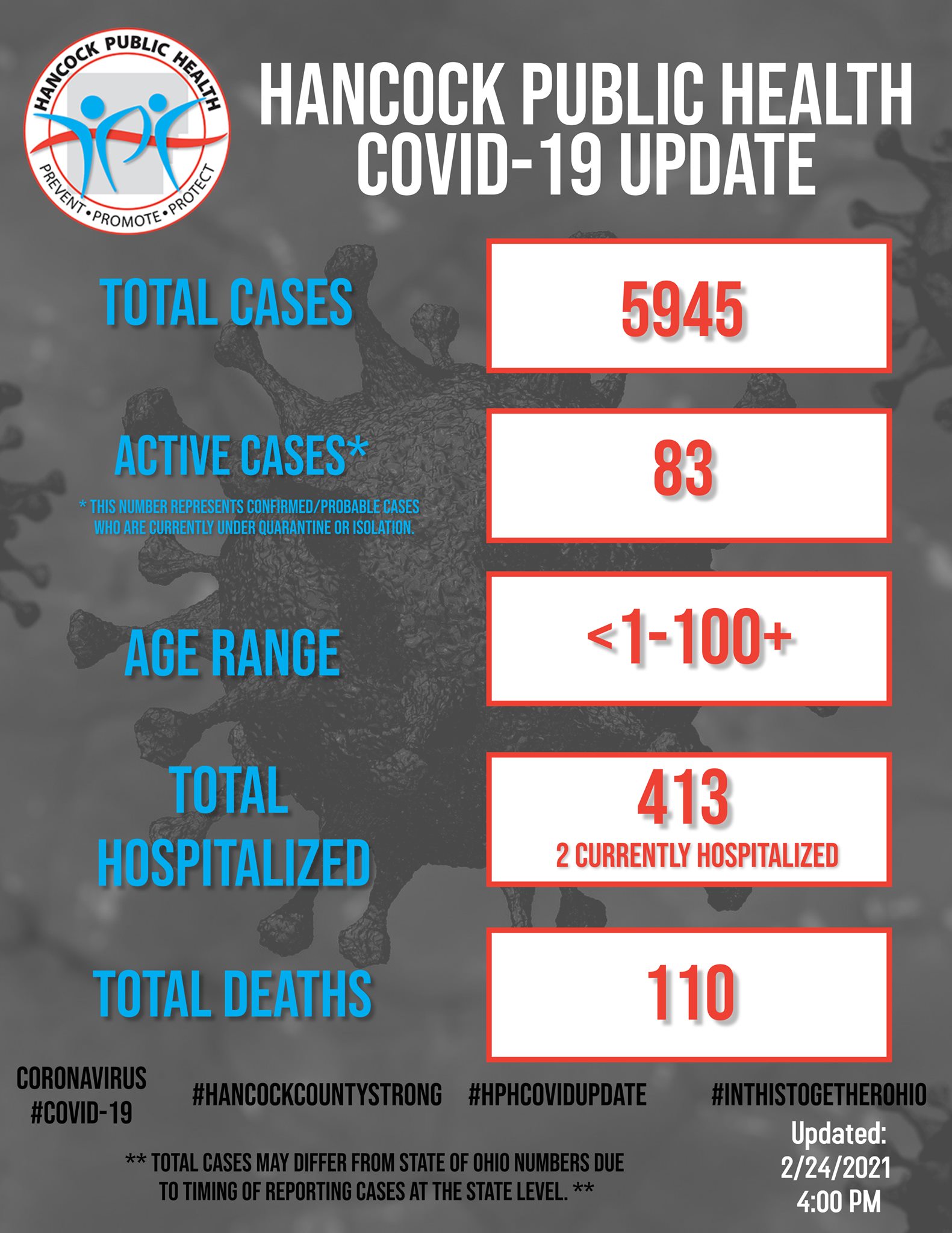 A Findlay man accused of rape has been indicted on those charges.

Court records state the offenses happened in August of 2020.

Ochoa was indicted on Tuesday and a warrant for his arrest was issued on Wednesday.

Potholes are already forming as the roads have been taking a beating from the freezing and thawing of the winter months.

If your vehicle is damaged by a pothole in Ohio the state might pay for the repairs.

The Ohio Department of Transportation is urging people to report damage to vehicles caused by the potholes or debris on the road immediately.

Then, a claim agent with the state will be in touch to assess the damage and possibly offer compensation.

ODOT points out that they are responsible only for Interstate, U.S. and State Routes, outside of municipalities

(ONN) – Racism would be declared a public health crisis in Ohio and the day celebrating the official end of slavery would become a paid state holiday under racial justice measures reintroduced at the Ohio Statehouse this week.

The measures were originally introduced in the wake of the killing of George Floyd in Minneapolis, which sparked nationwide protests last summer.

Efforts to pass the measures last legislative session were unsuccessful.

Democratic State Senator Sandra Williams of Cleveland, a co-sponsor, said racism needs to be declared “a public health crisis to assure every Ohioan that the legislature is working to make Ohio a fairer, more equitable state.”

The measures call for educational efforts to address racism, the review of all legal ordinances to determine if they’re racist in nature and more.

Also reintroduced was a bill to make Juneteenth, the day celebrating the official end of slavery, a paid state holiday.

This week, @SenSWilliams and @HearcelCraig reintroduced a resolution declaring that #RacismIsAPublicHealthCrisis. Twenty-five cities, counties & boards of health across Ohio have passed similar declarations. Read more about what this legislation would do:https://t.co/CbEcLjIEHH pic.twitter.com/pQCHVkeGJa

A teenage girl died after falling through the ice on a lake in Highland County and an ODNR officer responding to the situation also died.

A teenage boy was able to rescue himself from the ice and was taken to the hospital.

The 16-year-old girl was recovered by divers unresponsive and later pronounced deceased.

The ODNR says the 15-year veteran of the ODNR suffered a medical emergency during the search.

“Our hearts are with the family and loved ones of Officer Jason Lagore, who died in the line of duty last night,” said Ohio Department of Natural Resources (ODNR) Director Mary Mertz.

“Our law enforcement officers and their families carry a unique and challenging burden of responsibilities, and we are deeply grateful for their service.”

Fran and I offer our deepest condolences to Officer Lagore's family and his colleagues at @ohiodnr. In honor of his life and service, I've ordered flags lowered on public buildings and grounds in Highland County, and at the Statehouse, Riffe Center, and Rhodes Tower in Columbus. https://t.co/kNPY5yXV4l

Governor Mike DeWine has ordered flags flown at half-staff in remembrance of the more than 500,000 Americans who have died due to COVID-19, including nearly 17,000 Ohioans.

All United States and State of Ohio flags on public buildings and grounds will be flown at half-staff until sunset on Friday.

This order was issued on Tuesday in accordance with the order issued by the President of the United States.

(the picture above is the flag outside the Hancock County Courthouse)

Today, our nation passed another grim milestone in this pandemic: 500,000 lives lost. Join us as we honor their memory. https://t.co/AzUzXoVUgb