Hancock Public Health is reporting an increase in coronavirus cases in the county.

The agency said there were 381 total cases as of Monday, which is an increase of 22 from Friday.

Active cases stood at 75 on Monday, which is an increase of two from Friday.

33 people have been hospitalized from the virus in Hancock County and three residents have died. 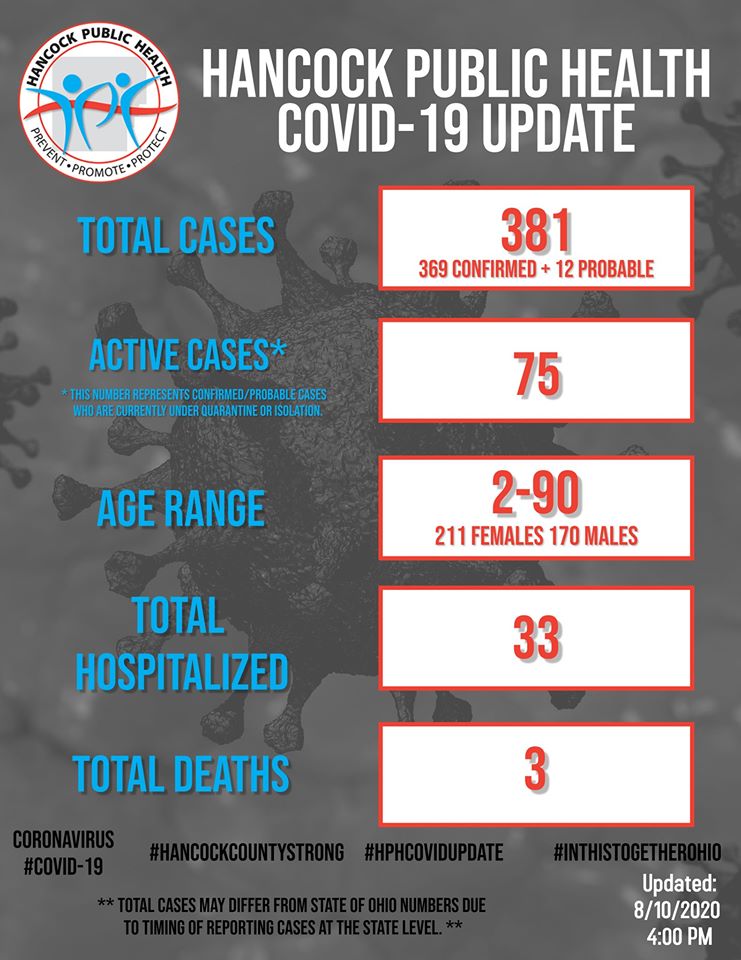 The Ohio State Highway Patrol says a wrong-way motorcyclist crashed into a trooper on Interstate 75 near Bowling Green.

The crash happened a little before 10 p.m. Monday on Interstate 75 southbound near U.S. 6.

The highway patrol says the trooper was in search of the wrong-way driver when he saw a Harley Davidson coming north in the southbound lanes.

The trooper moved to the inside shoulder and was almost stopped when his cruiser was struck by the motorcycle.

The driver of the motorcycle, Daniel Stover, 52, of Findlay, was thrown from the bike.

He was taken to a Toledo hospital for injuries that are not believed to be life-threatening.

The trooper suffered minor injuries in the crash and was taken to a Toledo hospital.

The highway patrol says impairment appears to be a factor in regards to the crash.

Around the same time the trooper was intercepting the wrong-way driver, a second crash occurred in the southbound lanes.

The patrol says a truck was slowing when it was rear-ended by a motorcycle being driven by Ryan Gleckler, 35, of Bluffton.

Gleckler was suffered serious injuries and was transported to a Toledo hospital.

Southbound Interstate 75 was closed for several hours following the crashes.

The Great Midwest Athletic Conference announced on Monday that it has postponed fall contact sports to the spring. The conference includes the University of Findlay and Tiffin. The decision affects football, women’s volleyball, and wens and women’s soccer. Athletes playing golf, tennis, and running cross country will be allowed to continue with fall competition assuming that they can conform to national, local, and NCAA health and safety requirements, according to a statement from the conference. 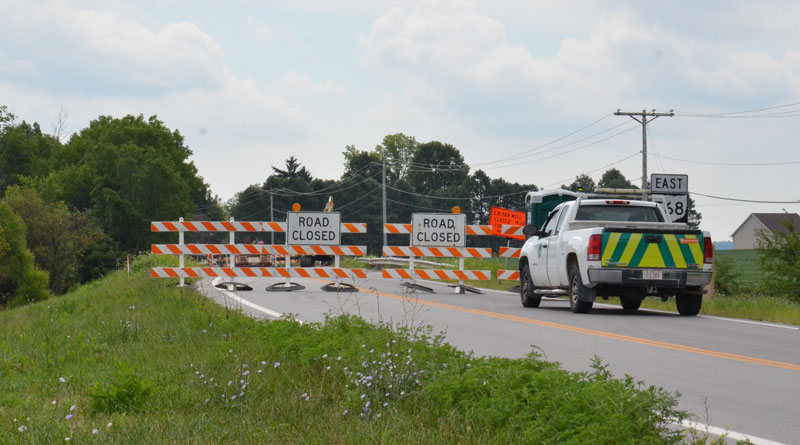 The Ohio Department of Transportation has begun two new road construction projects. State Route 568 two miles east of CR 236 has closed for replacement of the bridge over the outlet ditch. The road will be closed for the next 4 months. A detour is posted including state routes 37, 15, and 330.

Pavement repairs have begun on US 224 between SR 235 and Ottawa. The highway will be reduced to one lane with flaggers on hand as the work occurs. Repaving of the stretch is expected to begin next week, with one lane maintained.

State road crews continue with several ongoing projects this week including I-75, bridge work on State Route 12 east of Findlay, and bridge replacements on State Route 37 near Riverdale School and in Arlington.

A Tiffin company has acquired part of a Findlay company along with some employees.

Arnold Machine Inc. has announced that it has completed a deal to acquire the industrial parts washer and custom equipment division of Findlay Machine & Tool.

AMI says it will be manufacturing the equipment at its Tiffin plant under the FMT brand and is adding 13 employees from FMT to the AMI staff.

“The work being done at Findlay Machine & Tool fits perfectly with what we were already doing at AMI and diversifies our product offerings,” said President and Owner Zach Arnold.

“We’re excited to be bringing that production and these highly skilled workers to Tiffin.”

AMI employs 50 people at its facility in Tiffin.

Get more details on the deal here from the Tiffin-Seneca Economic Partnership.

The Mid-American Conference is postponing all fall sports due to COVID-19 concerns.

The MAC says its Council of Presidents unanimously voted to take the action with the health and safety of its student-athletes, coaches and communities as its top priority.

The fall sports affected are men’s and women’s cross country, field hockey, football, men’s soccer, women’s soccer and women’s volleyball. At this time, there have been no decisions made regarding winter sports.

MAC Commissioner Dr. Jon Steinbrecher says the conference will make every effort to provide competitive opportunities for the postponed sports in the spring.

“We support the difficult decision to postpone all Mid-American Conference fall seasons in the best interests of health and safety. BGSU Athletics will work with each student-athlete impacted as we navigate the COVID-19 crisis together. Unlike our academic and campus experiences, athletic competition rarely allows for physical distancing and additional safeguards such as wearing face coverings. Our student athletes and coaches of men’s and women’s cross country, football, men’s and women’s soccer and volleyball continue to be outstanding ambassadors of Bowling Green State University, and we look forward to competing next spring”

A man who loved Hancock County and did so much for it was given a nice sendoff by the community.

Bill was a lifelong farmer and a Hancock County commissioner from 1985 to 1997.

Bill’s grandson Lucas describes the touching tribute the community gave his grandfather during the procession to Knollcrest Cemetery in Arcadia where he was laid to rest.

(Video of the tribute is below)

Lucas told us his grandfather had the honor of meeting some important people over the years, like President George H.W. Bush and Neil Armstrong.

Bill and his wife Nancy were 4-H advisors for 25 years for the Jr. Dairyman 4-H Club.

According to Bill’s obituary, one of their last acts of generosity was donating funds in 2018 to build a youth show arena at the Hancock County Fairgrounds. 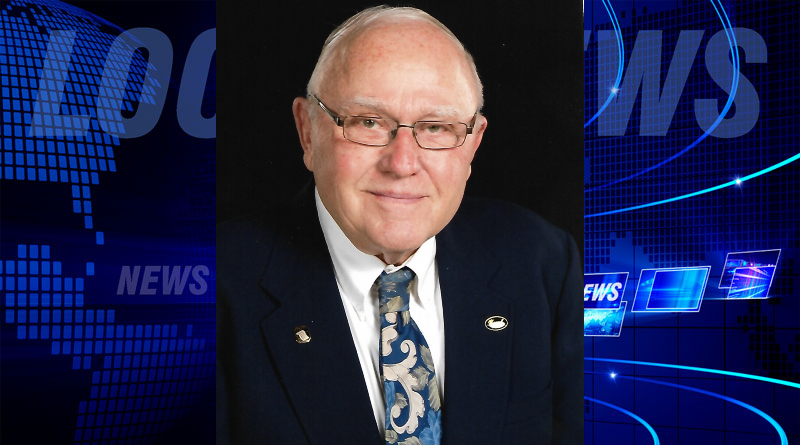 Five Cleveland Browns players have opted out of the 2020 NFL Season due to COVID-19 concerns.

The team says all of them are lineman, including Drew Forbes, Drake Dorbeck, Colby Gossett, Andrew Billings and Malcolm Pridgeon.

Both Billings and Forbes were expected to be part of the team’s line rebuilding effort.

Those who choose to not play will get a $350,000 stipend if they opt-out voluntarily.

The Browns will begin the season at Baltimore on September 13th.

We want a season and together we can stay safe and help slow the spread of COVID-19 » https://t.co/Sx6L4Y2xA3#IWantASeason pic.twitter.com/6nE7vdeXbO

Health officials are explaining Ohio Governor Mike DeWine’s differing diagnoses after the governor tested positive and then negative for COVID-19 on the same day.

While those results were positive, two subsequent PCR tests both came back negative.

Dr. Mohler says the PCR test is “the gold standard” and much more accurate than the faster antigen tests.

The number of active COVID-19 cases in Hancock County has gone down according to the latest data from Hancock Public Health.

The agency says there were 73 active cases as of Friday, which is a drop of 11 from Wednesday.

The total number of cases increased by 10 and now stands at 359.

31 people have been hospitalized from the virus in Hancock County and three residents have died.

Seven patients are currently hospitalized and one is in the intensive care unit. 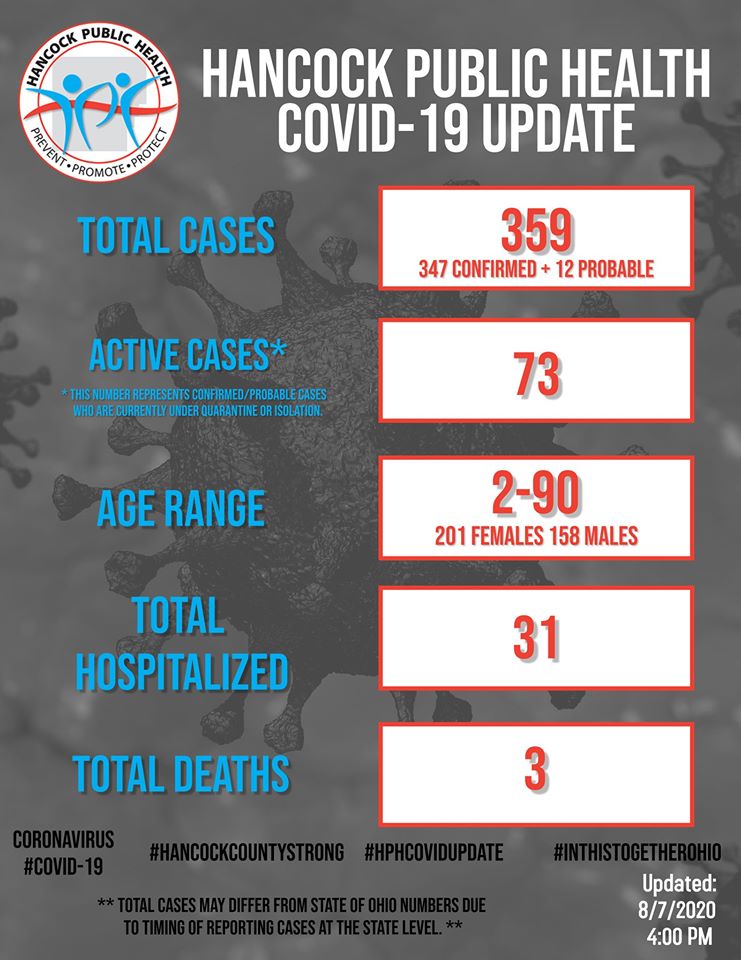