Reuters is reporting that Marathon began eliminating jobs across the company on Tuesday.

It’s not yet clear how the company headquarters in Findlay will be affected.

The ongoing pandemic continues to depress demand for products and services in the petroleum industry.

The company says it will announce its third-quarter financial results on November 2nd.

Marathon announced in August that it was selling its Speedway gas stations to 7-Eleven.

You can read more about that deal here.

The Hancock County Board of Elections says, as of Tuesday, it’s already had 9,162 voters request an absentee ballot for the upcoming election.

Jody O’Brien, Republican Director of the Hancock County Board of Elections, says absentee ballots will start to be mailed out to voters on October 6th, which is the same day early voting begins.

She’s asking people to not procrastinate in filling out their ballot and sending it back.

She says the last day an absentee ballot can be postmarked is November 2nd, the day before the election, or just drop it in the drop box outside the board of elections at 201 East Lincoln Street in Findlay.

Ohio Secretary of State Frank LaRose announced on Tuesday that more than 2 million Ohioans had requested an absentee ballot.

At the same time during the 2016 election, 957,260 absentee ballots had been requested.

There was discussion about the Eagle Creek Dry Storage Basin project just south of Findlay which is still in the preliminary engineering phase.

Project Manager Steve Wilson says the project is mostly in a holding pattern for now but they could do some additional engineering with the grant money previously allocated.

He says the project is estimated to cost around $60 million but the state has awarded only $15 million in grant money so far.

Wilson believes if it wasn’t for the pandemic, the rest of the grant money would’ve already been allocated and the project would be further along.

He believes the storage basin will have a great impact on flood reduction in Findlay once it’s completed.

“It will reduce the 100-year flood elevation at Main Street by around a foot and a half, and that would be on top of the reductions we’re seeing with the work that’s currently being done along the Blanchard River.”

The 600 to 800-acre floodwater storage basin would be constructed west of U.S. 68 and just north of Township Road 49. 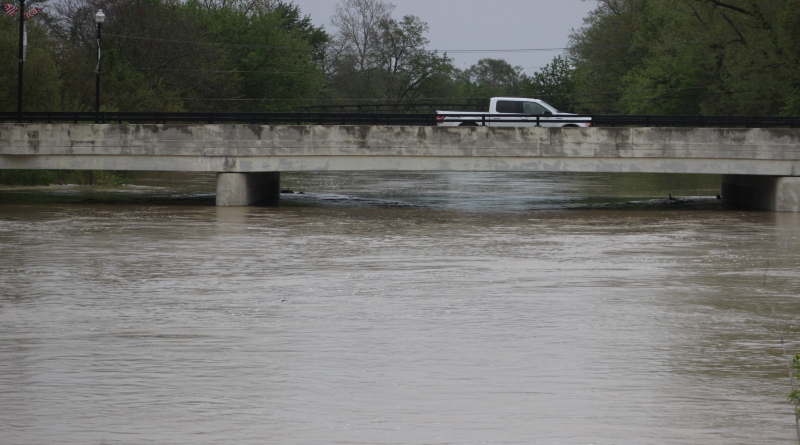 Ohio restaurants and bars are still having trouble making ends meet as the pandemic drags on.

The latest poll from the Ohio Restaurant Association shows 80 percent of restaurants don’t even expect to break even this year.

President John Barker says the limits on eateries and bars put into place because of the pandemic are making it so owners can’t make enough money.

He says more than half of those who responded to the poll say they’ve lost 20 to 70 percent of their business during the pandemic.

56 percent of restaurants believe they’ll be forced to close within nine months if they continue operating at their current capacity.

Less than 25 percent of restaurants think they can stay open indefinitely.

After a week at number 2, Putnam County is back at the top of the list of Ohio counties with the highest occurrence of COVID cases based on population.

State data shows Putnam County has had 625 cases of the coronavirus and 23 deaths.

Putnam County is still at level 3, or the red level, on the state’s COVID-19 alert map.

In the most recent numbers released by Hancock Public Health, Hancock County has had 696 cases of the virus in the county and ten deaths.

The Findlay Trojans football team is ready to get back on the field on Friday.

The team missed the last two games, against Central Catholic on September 18th and Clay on September 25th, because they were under quarantine after a player came down with the coronavirus.

The Trojans, 2-1, haven’t played since September 11th when they lost by one point to St. John’s at home.

The Trojans host Lima Senior at Donnell Stadium at 7 Friday night in a game you can hear on WFIN.

The volleyball team also had its season suspended after a player got the virus.

Their season will resume on Tuesday as they host Defiance.

Findlay City Schools has a dashboard where you can see how many students and staff in the district have the virus.

The Ohio Department of Transportation is collaborating with the Ohio State Highway Patrol to make work zones safer.

The highway patrol says enforcing traffic laws from the ground inside a work zone can be challenging, so troopers will be taking to the sky.

ODOT and the OSHP Aviation Section have identified nearly a dozen locations where troopers will target crash-causing violations like speeding, following too closely, and failure to move over.

The locations were selected due to a history of crashes, higher speeds and the type of barrier used to separate traffic from workers.

One of the work zones that will be monitored is on Interstate 75 around the Wood County/Lucas County line. Another one will be on I-75 in Allen County around mile markers 138 and 139.

There were 6,553 work zone-related crashes in Ohio last year.

Signs posted along the highway will alert drivers about the increased enforcement efforts.

The pilot project will be evaluated and based on results could be expanded next year.

The highway patrol routinely enforces speed violations from the air across the state.

Speed is measured by a pilot who times how long it takes a vehicle to pass between a series of lines painted on the roadway.

The violation time and speed information is then relayed to a trooper on the ground who makes the traffic stop.

(ONN) – After failing to impeach Governor Mike DeWine over his COVID-19 response, Clermont County Republican Rep. John Becker is trying to charge him with a slew of criminal offenses, including terrorism, bribery and interfering with civil rights.

The Columbus Dispatch reports that Becker, in a private citizen affidavit filed in Clermont County Municipal Court on Monday, accuses DeWine of disenfranchising voters, threatening the health of Ohioans by limiting hospitals to non-emergency procedures and shuttering businesses.

When asked for comment, DeWine spokesman Dan Tierney replied: “If this were serious, I would have a comment. Because it is patently absurd, I do not.”

The Cincinnati Enquirer is reporting that the Clermont County prosecutor reviewed the affidavit and did not find any basis for the filing of a criminal complaint.

A federal judge has ruled that a signature-matching requirement for ballots and ballot applications in Ohio are burdensome to voters but that changing the process so close to the election could be “damaging.”

The ruling is the latest back-and-forth between LaRose and voting rights advocates in Ohio as procedures for election safety and mail-in voting continue to be a point of contention as the nation prepares to vote amid the pandemic.

Get more voting resources from the Hancock County Board of Elections by clicking here.

Some Findlay residents awoke Sunday morning to find that their campaign yard sign had been vandalized.

A handful of Biden-Harris signs in front of homes on South Main Street were damaged with a black line painted across them.

WFIN spoke with one of the homeowners who said he noticed the damage on Sunday morning.

He was able to wash most of the paint off the sign although some is still visible.

Another homeowner had their campaign sign stolen and filed a report with the police.

The City of Findlay previously reminded people that tampering with election signs is illegal and is vandalism.

Possible charges for someone caught vandalizing or stealing a campaign sign include disorderly conduct and criminal mischief.